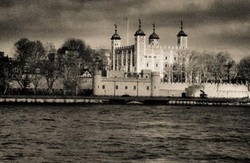 In the early 1080s, William the Conqueror began to build a massive stone tower at the centre of his London fortress. Nothing like it had ever been seen before.

Through the centuries that followed, successive monarchs added to the fortifications. This short history charts the different stages of its construction and explains its role as fortress, palace and prison

Since it was established by William Conqueror in 1066 to keep hostile Londoners at bay, the mighty Tower of London has been the scene of Britain’s most dramatic, fascinating and surprising history. Step in now.

1066
William the Conqueror establishes the Tower to keep hostile Londoners at bay.

1101
Ranulf Flambard, the first known prisoner at the Tower, makes a daring escape.

1155
Thomas Becket, keeper of the works at the Tower, carries out repairs.

1360
John II ‘the Good’ of France lives in great splendour as a prisoner.

1381
Simon of Sudbury, Archbishop of Canterbury, is dragged out of the Tower and murdered on Tower Hill during the Peasants’ Revolt.

1389
Geoffrey Chaucer, clerk of works, oversees completion of Tower Wharf. Chaucer is better known for having written The Canterbury Tales.

1483
The ‘Princes in the Tower' disappear, presumed murdered.

1485
Henry VII founds the body of Yeoman Warders or 'Beefeaters'.

1536
Queen Anne Boleyn is beheaded on Tower Green by a swordsman brough especially from France.

1554
Lady Jane Grey, the ‘nine days queen’, is executed. Princess Elizabeth, later Elizabeth I, is imprisoned in the Tower.

1605
Guy Fawkes is tortured at the Tower following the failed Gunpowder Plot to assassinate James I and blow up Parliament.

1826
Duke of Wellington becomes Constable of the Tower and appoints Yeoman Warders based on their exemplary military service.

1835
Tower Menagerie closes. The animals are transferred to the new London Zoo.

1841
Crown Jewels are saved from fire.

1952
East end London gangsters Ronnie and Reggie Kray are held at the Tower.